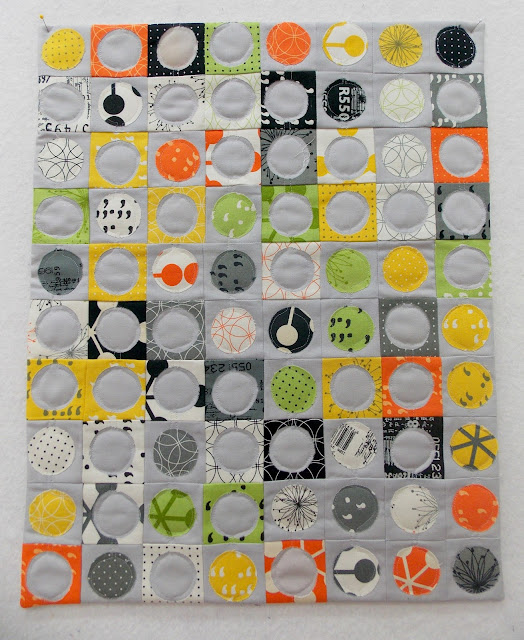 Isn't this a fun mini quilt? Judy made this with a pack of Comma - Moda Candy Squares, some Kona Cotton Ash and Steam-a-Seam. The finished quilt measures 19.5" X 15.5".


Northcott's much anticipated Stonehenge Oh Canada II collection by Linda Ludovico in support of Quilts of Valour - Canada is now in the store!

What can you make with Moda Candy Squares?

What can you make with those delicious looking Moda Candy Squares?
You could pick up Moda's Oh Sew Sweet! and choose from 18 delicious projects by Moda designers featuring Moda Candy from their collections. Each Moda Candy pack contains 42, 2½ squares and this booklet shows you how you can use them!

From mini quilts, to fabric baskets, to wall hangings and necklaces, see what designers like Sandy Gervais, Pat Sloan, Bonnie & Camille and other Moda designers put together for you.

Judy whipped this mini quilt up from the book. The pattern is by V and Co. 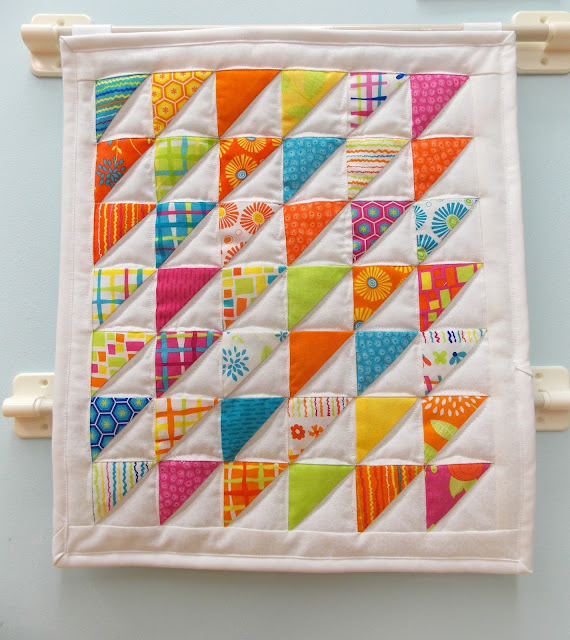 You can enjoy spring and still do some sewing with these quick and easy projects.

Pick up a Snap Sack® Kit and whip up a delightful, collectible wall hanging in no time. The kit includes the pattern and all the fabric you need for the top, backing and binding for only $15.99. Snap Sack® Kits are designed by Joan Ford from Hummingbird Highway.  Look out for more in this series.

It's time to have some fun! Grab this great Snap Sack® Kit and get ready for Happy Hour! This easy to piece wall hanging is a great gift for a fun loving friend or bride to be on her bachelorette party!
Click here to purchase: Snap Sack® Kit - Happy Hour  for only $15.99 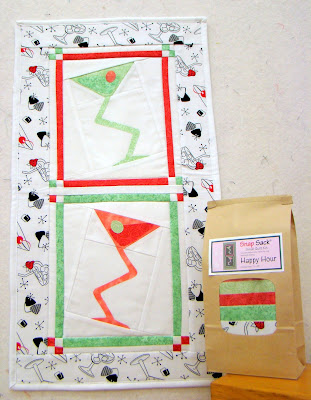 These fun sail boats are perfect for your little guy who wants to sail away on new adventures, or for your man who loves his boat. Regatta is made with Sail Away—a lovely nautical themed collection by Deborah Edwards for Northcott Studio. The quilt finishes at approximately 16" X 21".
Click here to purchase: Snap Sack® Kit - Regatta for only $15.99 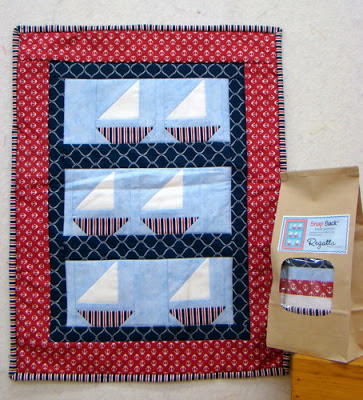 Isn't this little guy simply adorable! Just for Fun - It's a Hoot is designed by Eileen Sullivan from The Designer's Workshop.  You can use this as a little wall hanging, a mug rug, or even just frame the top for a fabric picture! A basic knowledge of paper piecing is required to make this project.  The kit includes the pattern and all the fabric you need for the top and backing for only $7.99. We finished off this little quilt envelope style. It's a Hoot finishes at approximately 7.25" X 6.25"
Click here to purchase: Just for Fun - It's a Hoot Mini Quilt Kit for only $7.99 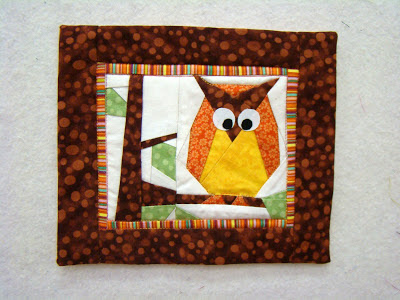 This beautiful quilt with historical ships is a must have for the sailors and ship aficionados in your family.
Designed by Prairie's Edge Patchworks, the quilt features the Clipper, Brigantine, Frigate, and Schooner. The ships can be hand or machine embroidered for a stunning result.
The finished quilt measures 48” X 48” and would make an elegant wall hanging.

Posted by Sew Sisters Quilt Shop at 2:25 PM No comments: 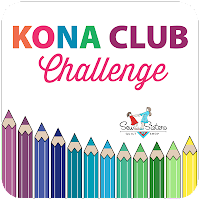 The winner of the Kona Club Challenge - Giveaway is:


We've emailed you. You can also write to us with your postal address at connect@sew-sisters.com.

Many thanks to Deanna from Little D and Me  for this awesome tutorial!
Posted by Sew Sisters Quilt Shop at 10:29 AM No comments: 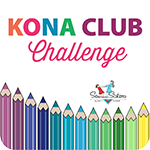 Deanna from Little D and Me took the Kona Club Challenge this month and here is what she came up with! Deanna used the colors we sent out in January for Kona Club. Make this lovely Tangram Pillow and leave a comment on this post for a chance to win these lovely fat quarters!

I’m Deanna Doornbos and I blog at Little D and Me. I’m based in a small town north of Edmonton, AB, and have been dabbling in quilting for about 2 years now.  I started sewing when my daughter, Little D, was born three years ago. I taught myself to make clothes for her, drafting patterns based on clothes she had and tutorials from other bloggers.  My sewing has greatly improved since then - I've learned so much from others!  I still sew a lot of clothes and have an Etsy shop where I sell dresses, but I've also caught the quilting bug.

When I was contacted by Sew Sisters to make a tutorial for them using one of their Kona bundles, I was nervous because I'd never made or even tried to make a tutorial before.  But since I love a challenge, I accepted and chose the Kona January bundle for the blue, a favourite colour of mine.  I chose to make a pillow cover because I love that pillow covers give you the chance to make quilt blocks without making a whole quilt.  I love points and angles right now, so when thinking about a design, I looked for something with different angles rather than all one shape.  The Tangram puzzle came to mind and the challenge came to put the puzzle into fabric.

*because we are working with bias cuts I suggest starching your fabrics before cutting*
Set aside the square of Lake.
Cut the remaining squares in half as triangles.  From each, set aside one half and keep one half. 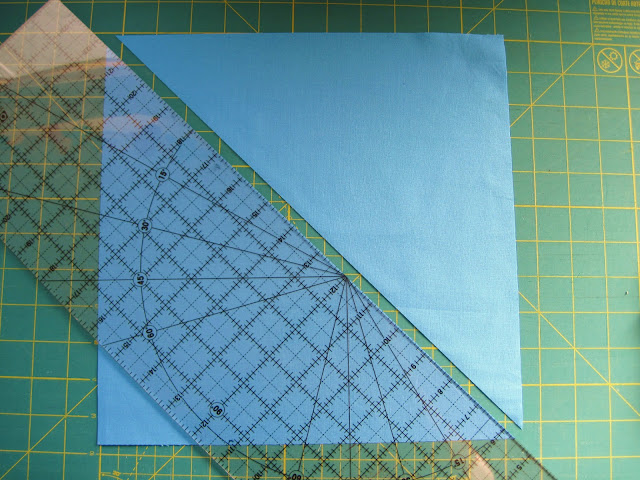 From the rectangle of Pacific, cut off a 4 inch triangle as shown, so you end up with a parallelogram. 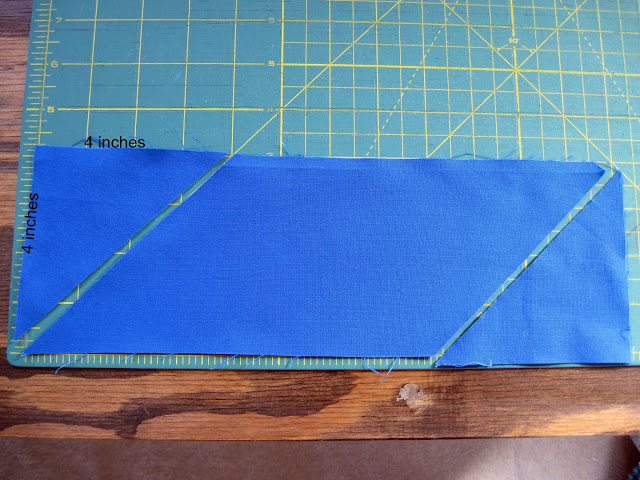 *all seams are a scant 1/4 inch*
*since we are working with bias cuts, you may need to ease fabrics into the right measurement, that's okay*

1. The pillow top is made of units that will get put together. The first unit is simply a triangle and a strip of Ash. 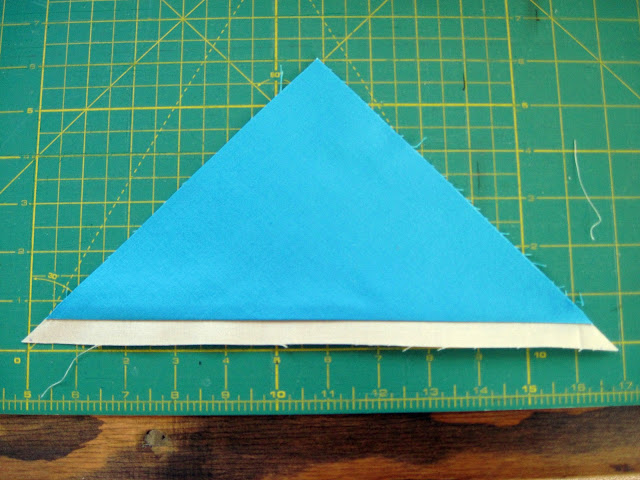 2. The second unit will be these pieces joined together. 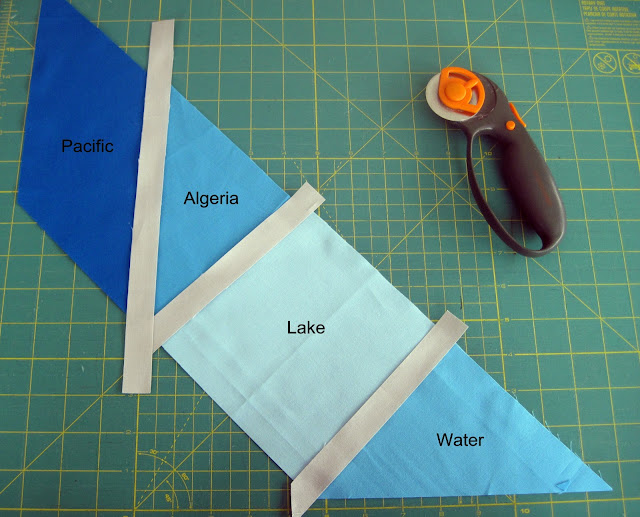 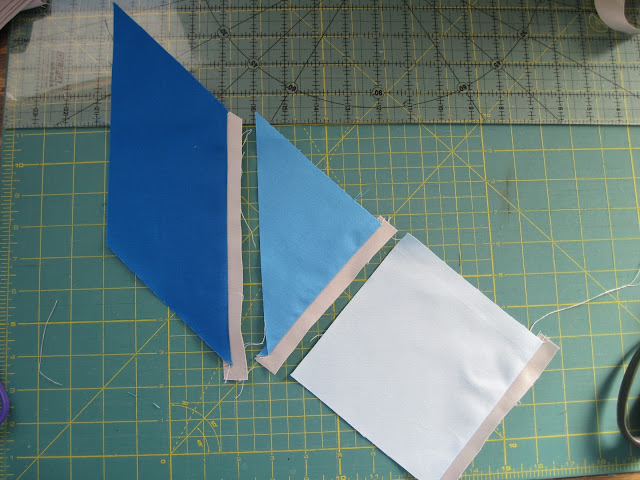 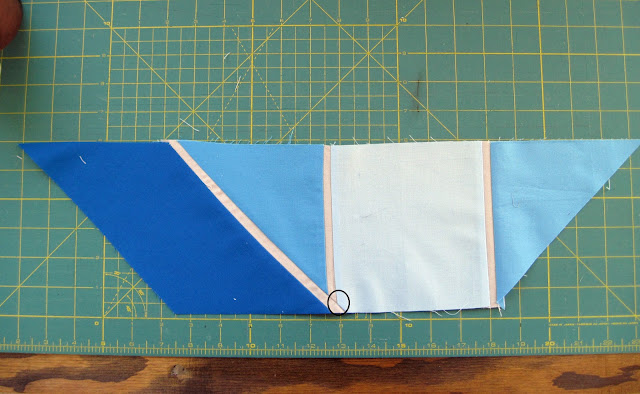 I pressed seams towards the blue, except one, simply to keep bulk down. 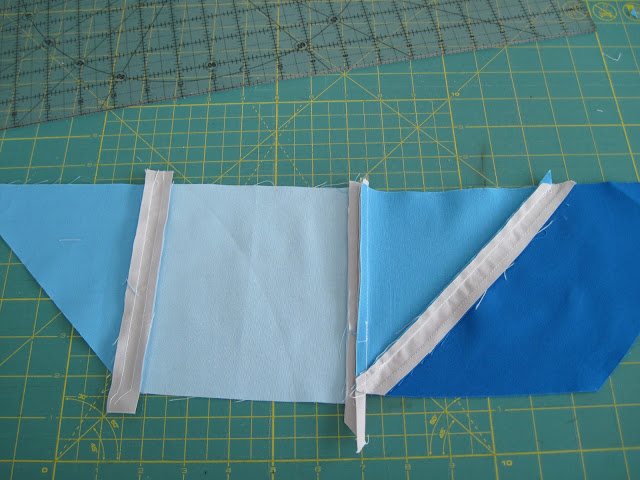 3. Now join the strip we just made to the triangle of Water.

A trick I used to get the parts lined up together is to first press down a quarter inch of the Ash strip that's on the triangle of Water.  When it's folded over, snip off the corner bit and then when lining up the pieced strip, the angle of the strip of Ash should match up to the straightedge of the parallelogram. 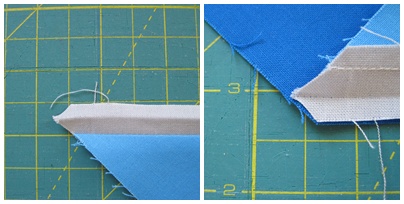 You should now have this: 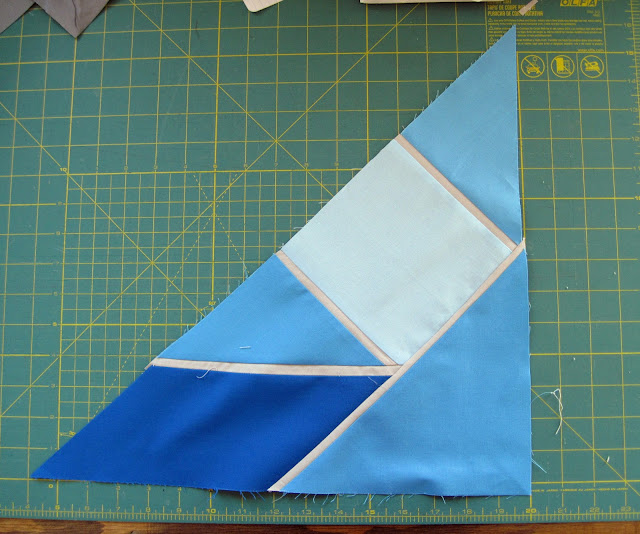 Don't worry if things look a bit wobbly - it's because we sewed some pieces on the bias.

4. The last part to piece together are the two large triangles. 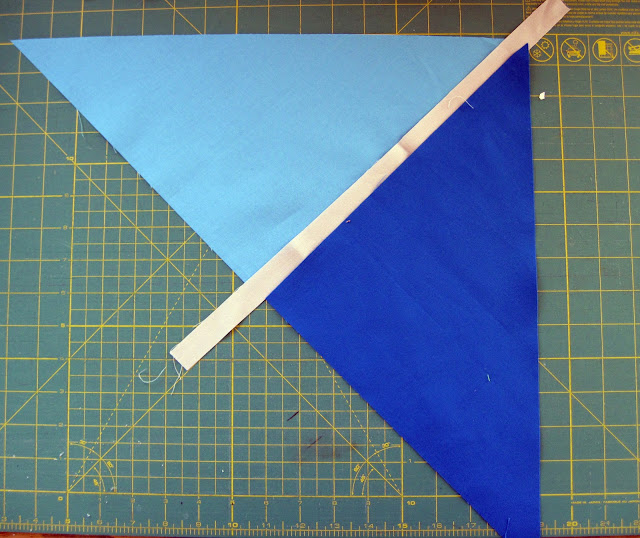 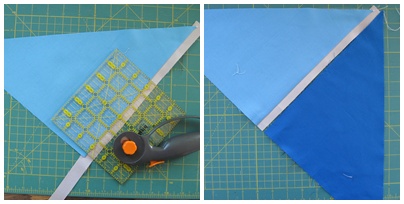 5. The two halves have to be sewn together now. 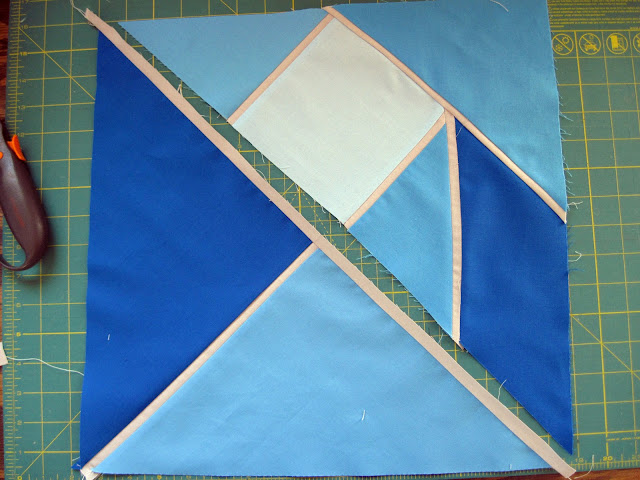 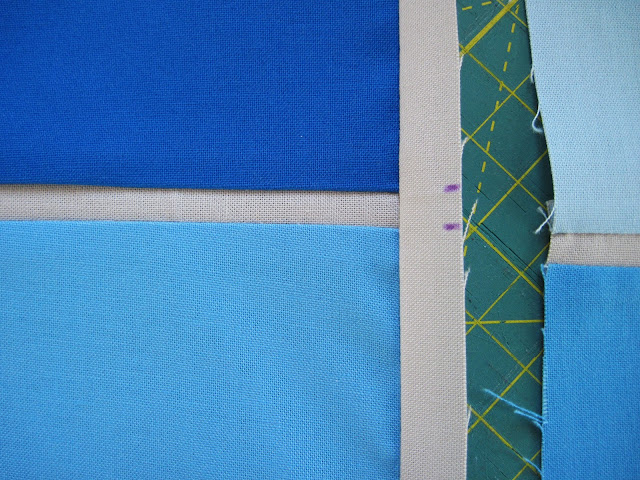 You now have the hard part done.
Because we've sewed on the bias, our block is a bit wobbly, so take some pattern weights (I use washers) and ease the block into a 15.5 inch square.  Trim. 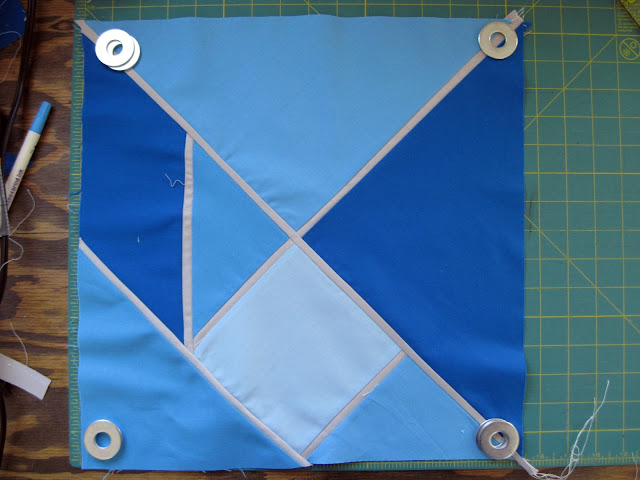 As you can see, I had to trim of some blue on the bottom as well.

6. Once you've trimmed the block, we're going to sew on the 1 inch Ash strips.
Your pillow top is now done!  It should measure 16.5 inches square. 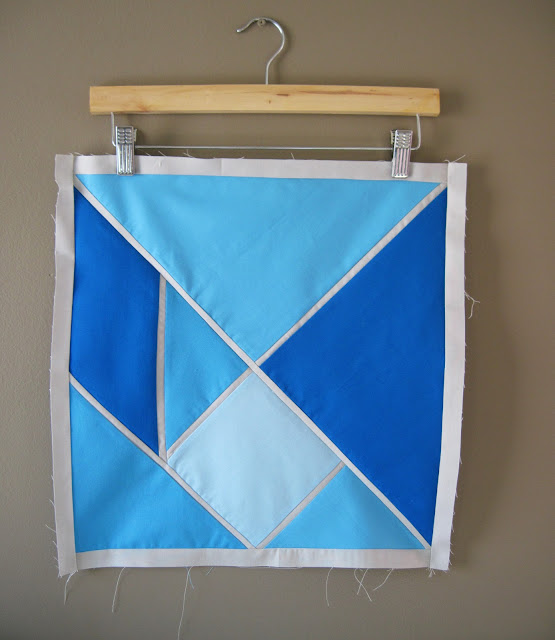 Quilt the top as you'd like using the 17 inch squares of lightweight low-loft batting and backing fabric.  Trim to 16.5 inches.

7. For the back of the cover, I chose to do a zipper because I think it looks neat and clean and it's pretty simple to do.  I won't reinvent the wheel here, but instead direct you to a great tutorial for zipper backs here at Sew Mama Sew.

I chose to piece together some random leftover bits for one half and then I used leftover Ash for the other half.  For the zipper flap I used a strip of Lake.  I always like to choose a longer zipper than I really need, just because I like to trim off the metal bits. 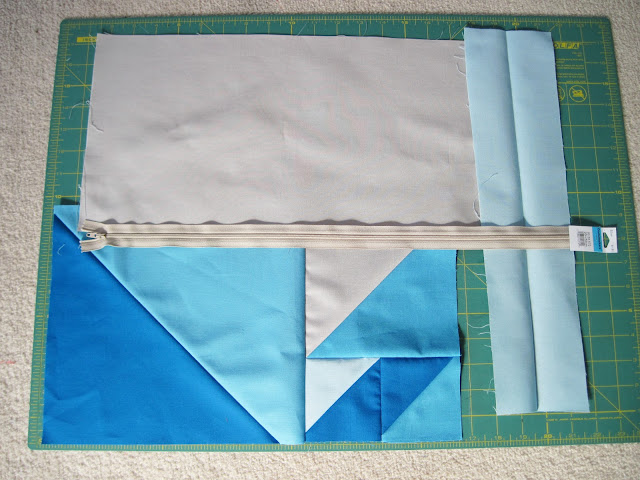 Because I had pieced the bottom, I backed it with some fabric to protect all the seams.  I did the same to the top piece of Ash, just because I like a good and sturdy cover.

Follow the tutorial and you should end up with this: 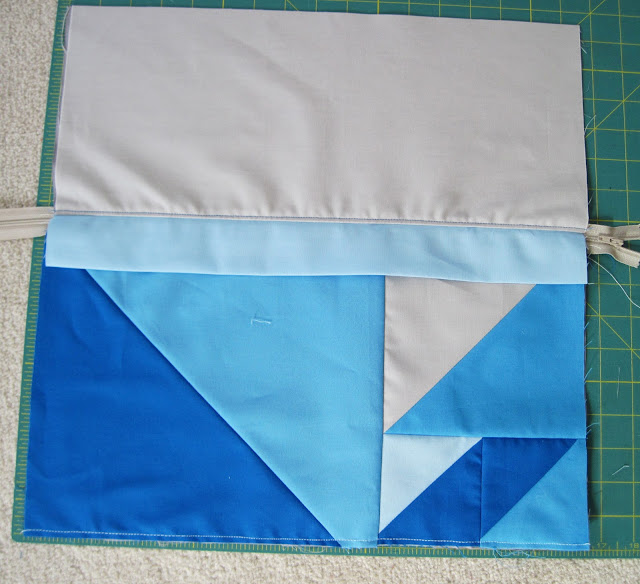 Don't trim the zipper ends yet.

Open up the zipper half way and match up the top to the back and pin in place and sew with a 1/4 inch seam allowance.  Clip the corners and turn it right side out.  Stuff it with a 16" pillow form and you're done! 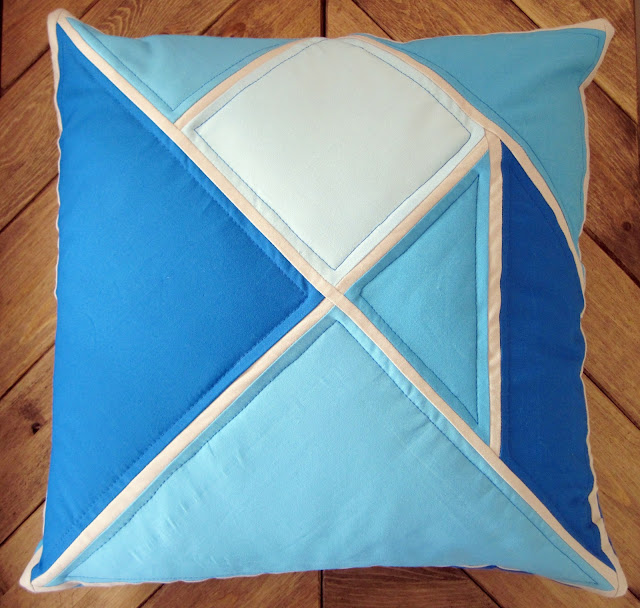 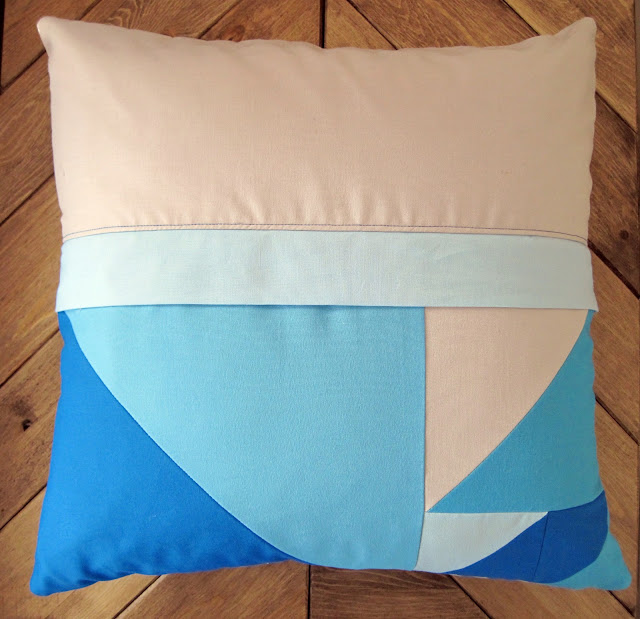 Admire your new pillow and throw it on a chair. 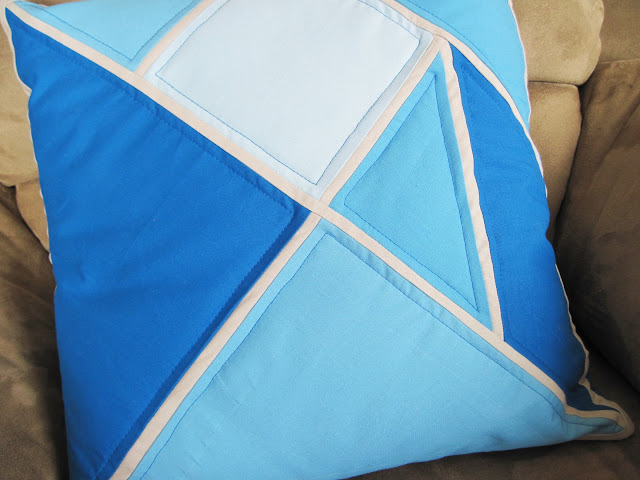 You could win 4 fat quarters of the Kona Cotton Solids Deanna used to make her Tangram Pillow!
Just leave a comment on this post for a chance to win.


If you are no-reply blogger please leave your email id in the post.
We will leave the giveaway open till Tuesday May 14th, 2013. Winner will be announced Wednesday, May 15th. Good luck everybody and enjoy making your very own Tangram Pillow! 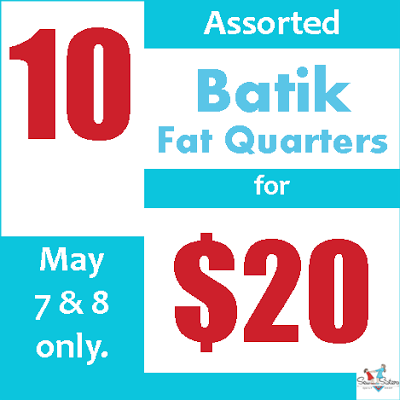 Posted by Sew Sisters Quilt Shop at 10:34 AM No comments: